All City Facilities Reopening on July 6, 2021
Masks will still be required for unvaccinated individuals

Although little is known of the earliest settlement of the area by Native Americans, we do know that about 6000 years ago warm, dry weather promoted the spread of population into the upper Winooski River valley. By 1200 AD extensive settlements developed throughout the region and were linked by trading networks. The rich floodplains and relatively warm southern exposures were conducive to settlement. After the arrival of European settlers, between 1600 and 1800 AD, war and dispersal virtually destroyed Native American settlement. However, early investigators in the mid-1800s reported burial mounds and other evidence of Native Americans. Otherwise, material evidence is limited to three recorded sites in the Vermont Archeological Inventory. All of these were random, chance finds of stone tools and spear points. This lack of evidence is probably due to intensive development in highly sensitive areas, past flooding which wiped out remains, and the fact that little investigation has been undertaken. 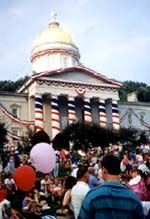 18th Century to Modern Times In contrast to prehistoric archaeology, historic archaeology is well documented. The earliest settlement lies west of the North Branch along Elm Street, where a Colonel Davis built a log cabin in 1787 or '88. Although much of earliest Montpelier has been replaced, significant evidence of our early settlement remains, though much of it is buried and waiting to be discovered. The City of Montpelier was originally chartered in 1781 as a grant to settlers from Massachusetts. The first settlement was established along the North Branch in 1787, during the time Vermont was an independent republic. Original grantors envisioned the main portion of the town growing on high ground around Montpelier Center, but the availability of transportation routes and mill sites attracted early settlement along the riverbanks. By the time statehood was achieved and the settlement was organized as a town, Montpelier had a population of 113. The early years of the community saw rapid growth with an influx of settlers who built saw and grist mills, roads, schools, churches and inns. 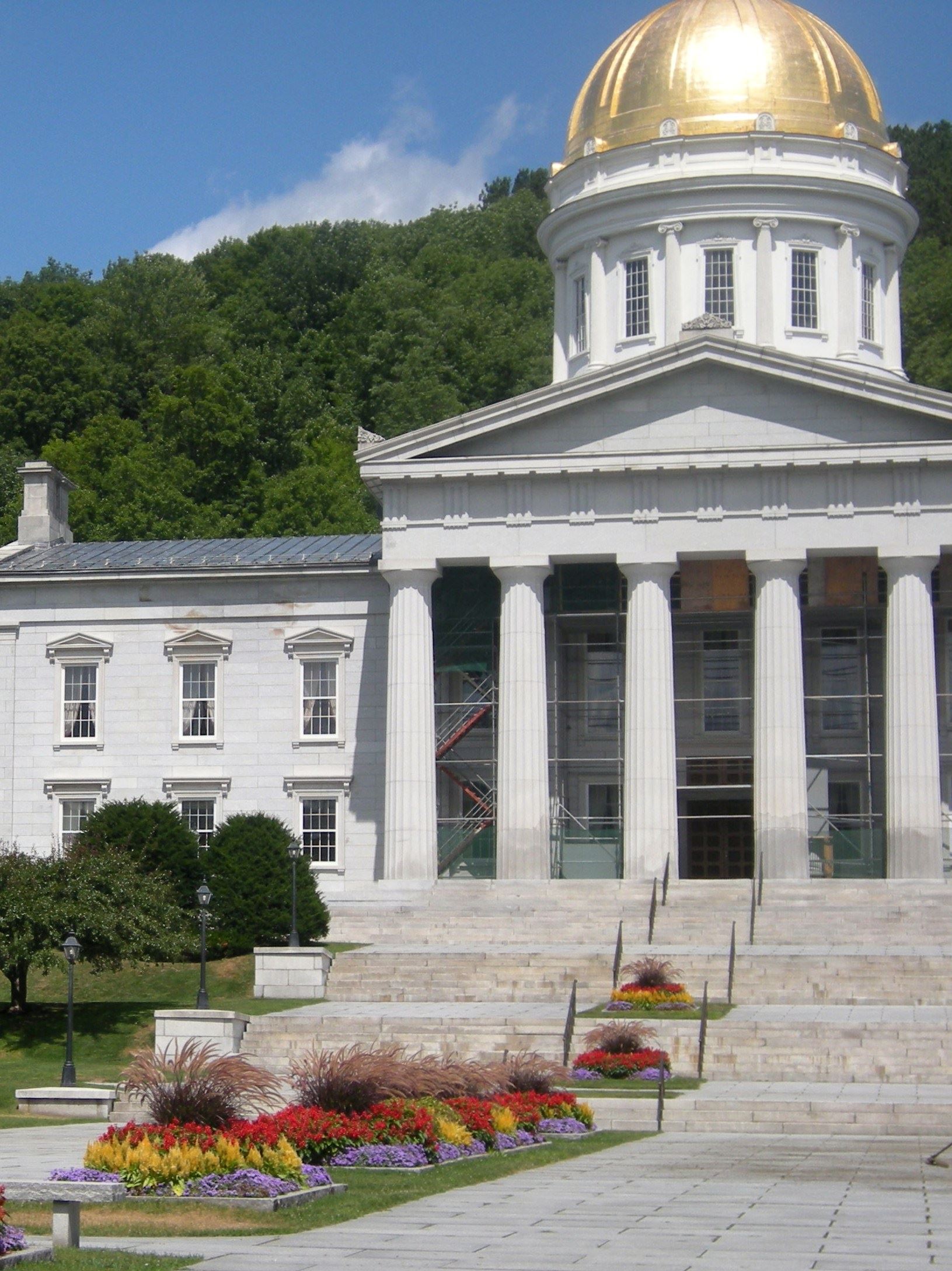 By 1805 the town had a population of 1200. In that year the State Legislature sought a permanent home. Montpelier was selected because of its central location, and because local residents provided land and money. A humble statehouse was constructed on State Street. This first legislative home was replaced in 1836 by a statehouse designed by Ammi B. Young, largely at the community's expense. This granite structure was gutted by fire in 1857. The present statehouse, designed by Thomas Silloway, was constructed on the same site in 1859.

In 1811, the growing town was selected to serve as shire town for Washington County. In 1828, the financial service sector was established by the Vermont Mutual fire Insurance Company. In 1848, the National Life Insurance Company was established, followed by the Union Mutual Fire Insurance company. Also by the mid-1800s, the railroad arrived which stimulated the business of the town. Thus, by the mid-nineteenth century, the principal economic components of the community, which continue to this day, were firmly established.
The configuration of the early village was strongly influenced by geography. As early as 1799 a bridge was constructed across the Winooski River to Berlin. By 1858, the layout of the main streets paralleling the rivers was in place. The downtown street pattern has changed very little since that time. In 1849, Montpelier Village separated from the rest of the town, which was reorganized as East Montpelier. Post Civil War After the Civil war, the antecedent of Vermont College moved to Montpelier from Newbury, Vermont, and became known as Montpelier Seminary. In 1936, it became Vermont Junior College, and in 1953 it was converted to Vermont College for Women. In 1972, the college was acquired by Norwich University. As the bottom lands along the rivers became developed, homes were established along the surrounding hillsides, frequently on land claimed from the incredibly steep slopes. Several natural disasters figure prominently in the development of the City. In 1875, a large fire destroyed many downtown buildings. In 1927, a great flood inundated State and Main Streets with 12 feet of water causing great damage. Nearly all bridges connecting the banks of the North Branch and Winooski rivers were replaced after the flood. Many of these steel truss bridges, hastily put up often using pre-fabricated structures, are now considered landmarks in the community.
Modern Amenities & Growth A view of Montpelier in 1884 shows a compact village with many features that still exist today - the Statehouse, County Courthouse, the Pavilion Hotel, many churches and the retail buildings of downtown. The view shows stone working sites, tanneries and other small manufacturers. By 1925, nine granite works were established in the City to refine stone from the famous quarries in Barre. In 1895, Montpelier reorganized as a City. In 1898, the northern portion of the Town of Berlin on the southern bank of the Winooski chose to be annexed, and the present form of the City became established. In 1899, the City was given 134 acres of land by John E. Hubbard for use as a park. In 1911, additional land was donated where the present Hubbard Park tower stands. 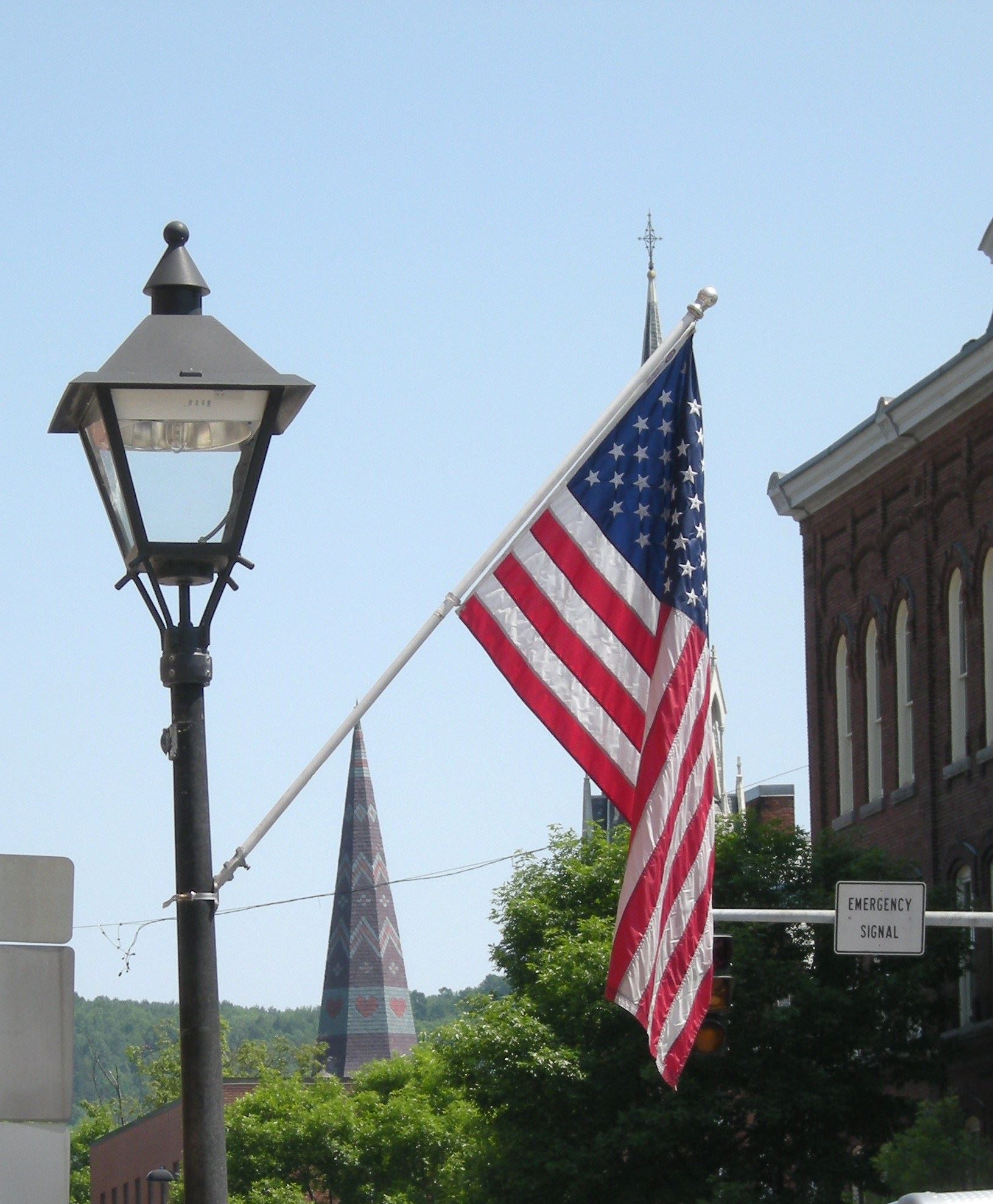 The City grew slowly in the late 19th and early 20th centuries during the period of intensive out-migration from the State to new lands in the West, or to industrial centers elsewhere in New England. Montpelier was already established as a government, market, service and industrial center in the region. When the automobile arrived, new state highways were routed to the City limits, and traffic then circulated through the original streets of the City. In 1954, a new bridge was constructed at Bailey Avenue which linked to an extension of Winooski Avenue, now Memorial Drive, and diverted some of the traffic from the downtown area. The City has remained a center for government, commerce, industry and services. In recent years development has been influenced by expansion of the state government and associated services as well as by the financial services industry. The City remains a regional center for arts and entertainment.
Coronavirus Updates
Agendas & Minutes
Welcome to Town
Online Payments
[]