"As March 11, 1992 dawned, Vermont entered the fourth consecutive day of an early spring thaw and police in the state capital kept a watchful eye on the city's rivers. The North Branch was high and the Winooski was brimful of snowmelt and rain and chocked with floating chunks of thick winter ice.

Minor spring flooding and ice jams had been a way of life throughout Montpelier's 2 centuries of history, and no 1 had an inkling this day was destined to be unusual. But at about 7 a.m., the groaning river of ice in the Winooski river shuddered to a momentous stop just downstream of the Bailey Avenue Bridge. The ice had jammed, shutting the door on the river as decisively as the closing of a bank vault. With nowhere to go, the Winooski backed up, pouring calamitously over its banks into the heart of Montpelier. 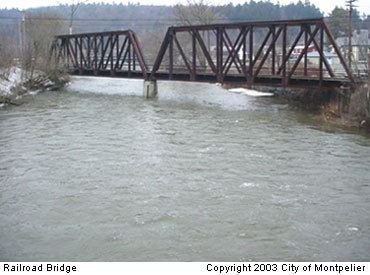 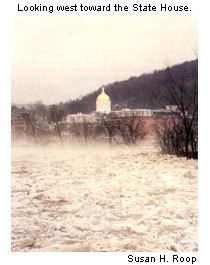 In less than an hour, the 2 swollen rivers effectively shut down 120 businesses, left more than 50 residents homeless, threw the workings of much of state government into disarray, and caused upwards of $5 million in damage. Miraculously, there was no loss of life, but the lifeblood of Montpelier's historic downtown was devastated by the 2nd great flood to strike the city in this century.

The 1992 event was very different from its predecessor nearly 65 years ago. The famous November, 1927 flood followed 3 days of torrential rains, and the destruction and death it caused -- nearly 100 Vermonters lost their lives -- were felt statewide. This time, except for a few other areas of localized river flooding, the damage was concentrated in Montpelier. And this time, it came with almost no advance warning.
Montpelier Police Chief Douglas Hoyt was probably the 1st to have a sense that disaster was about the strike. Alerted at 6:51 a.m. to a report of minor flooding on Barre Street, he rushed downtown and reached the intersection of State and Elm by the historic Garage building about 7 a.m. What he saw alarmed him: Water was already rising into the parking area behind State Street. Driving to the Bailey Avenue Bridge, he encountered a bleak and foreboding spectacle of "broken ice for as far as you could see." It was not moving, and Hoyt knew then that the city was in for trouble.

The swiftness with which the flood struck will remain its most enduring memory for many victims. In just a few minutes, city streets were inundated and impassable. Cars stalled in the road, basement windows and doors blew out from the pressure, and propane tanks ripped free of their moorings, spewing explosive vapors. Ice floes 3 feet thick sashayed through town. With their bridges, side streets like Langdon and School suddenly resembled canals, the oddly scenic sight masking the destruction occurring in basements and ground floors of Montpelier's historic buildings." 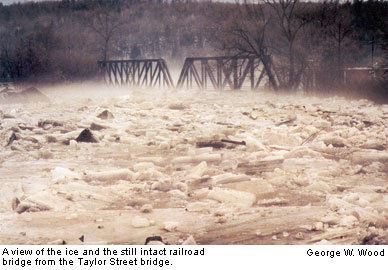 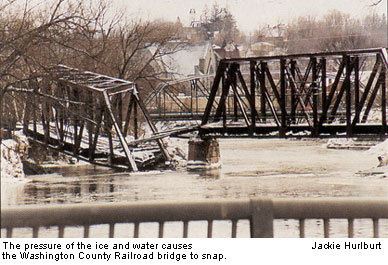 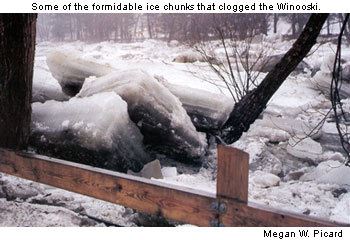