The following narratives were written the day after the flood by high school students in Mr. Blakeman's class at Montpelier High School.

Student 1
On Flood Day, after I left school, I went to my friend's house because I was told not to go home. My house is right next to the Winooski River. When I got to her house, I called home and told my parents where I was. My father had come home from work and my little brother had been evacuated from Main Street School. They said that even though the water was up to 5 feet downtown, the river still hadn't gone over the road by my house. 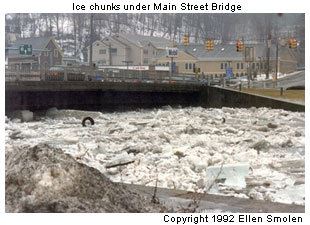 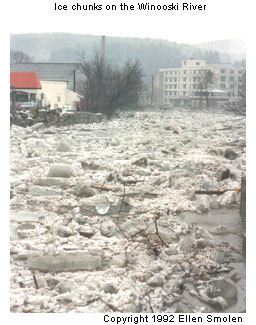 At around 1 o'clock my mother, sister, and brother arrived where I was staying, because they were evacuated. They weren't evacuated because of the flood but because the city was going to dynamite the ice jam close to my house. My father stayed at home so the pipes wouldn't freeze.

My friend and I were getting cabin fever, so we went outside and threw around a softball for awhile. After that we put on high-water boots and saw how far could wade into her pond. After that we went back into the house and hung around for a while. Then we decided we were missing all the action and went for a walk down her hill. We couldn't see any great amount of water, so we went back to her house.

My dad called and told us that the water had come over the road. Amidst the chaos, we were trying to convince our AFS people from Connecticut not to come. We all went out for pizza, and when we got back we called my dad. He said the roads were clear and we could go home. So we did.
Student 2
On Wednesday, March 11, 1992, I thought that it would be another normal day.

Ice chunks under Main Street BridgeI was in 1st period waiting for class to begin when the principal told everyone that there was no school because of the ice blocked up. Everyone was yelling. It was great, so I thought.

I found a ride home with friends. We all lived right up the hill from school so we expected to get home quickly. Wrong! We could not go over the bridge by the school. So we drove up Memorial Drive, trying to find a bridge to cross. All were closed. 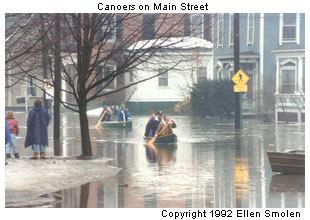 How were we supposed to get across the river? One friend suggested to go up by National Life and go home by Three Mile Bridge Road. We couldn't think of any other alternative, so that's exactly what we did.

By the time we got back into town, the water had started flooding into the streets and the water was to the middle of the wheels on the car. The car started over-heating. We got out of the water as quickly as we could and went home.

Meanwhile, my sister had not even gotten off her bus to go to school. They had told the bus driver to bring all the kids home, only this time he couldn't get the kids across the river. They were on the bus for over 2 hours and ended up at the college gym.

When I walked in the school door and up to 1st period class, all anyone could talk about was maybe school would be cancelled. I have to admit that I had no clue why. After all, I live on the Memorial Drive side of the river. All I noticed was heavy traffic. In class, though, some friends clued me in to the ice jams on the river.

All of a sudden, over the announcements, came the 1 we had been waiting for. The whole school was silent as we heard, then yelled relief and fled.

I Saturday in the school driveway for about 15 minutes, waiting to get to the street. The bridges were closed and there was a feeling of panic in the air. I had no problem getting home; I live on a hill. 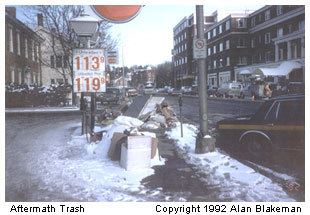 Later I went down to observe the river. The ice was packed up against the guardrails and water was deeply running through the parking lots on the other side from where I live. As cars floated by, I realized how lucky I was to live on the right side of the river. Ice chunks on the Winooski River

Student 4
After hearing over the announcements that school was canceled, I figured I would go home. I got into my car and got into the huge line of traffic in the MHS driveway. It took me 10 minutes to get out of the driveway. The closest bridge to get home was closed (it was closed before school), so I took the road toward the middle bridge by Sunoco. When I reached that bridge after 10 minutes in traffic, that bridge was also closed. I continued down the road toward town. The bridge by the Grand Union was also closed. I had no way of missing the river to get to my side of town.

I went to my grandparents' on upper Berlin Street. I called my mom and told her that I was going to go up by U-32 and down over Towne Hill Road. I did, and when I got down by Main Street School, I saw that the bridge to Elm Street was also closed. I had no way of getting home, that I could think of. Canoers on Main Street

I went to my girlfriend's house and called my mom. She couldn't think of a way for me to get home either. Then she called and said she could get me by going the back way around Pembrokes', up Gould Hill, down North Street, and then to Chestnut Hill. She did that, and the dirt roads were pretty bad. I had to leave my car at my friend's until about 9 o'clock that night. After I got home, we went down to see the flood. I went canoeing with a friend. We went behind the post office where cars were totally submerged in water. Then we were caught by the police and they told us to stop or we would get arrested.

Student 5
On the day of the flood, after they told us we could go home, I was leaving school and picked up my friend. It took us 45 minutes to get home. We went through bumper-to-bumper traffic toward Barre, up by U-32, and then we finally got home. My boyfriend came over after awhile because he couldn't find a way home. His mom came and took him by back roads. He had to leave his car at my house. My neighbors thought he spent the night!

Later I went down to 1st in Fitness and looked at the flood. A fire truck from Barre drove though the water downtown and caused a 2-foot wave that, I found out later, broke the seal in the vaults of the Howard Bank and water got into the safety deposit boxes. There was a minivan that had water up to its windows and was almost tipped over by that 2-foot wave. I saw many friends downtown, also. I wanted to take pictures, but - guess what - no film! Aftermath Trash

Good news: my family's business is high and dry. My parents tried to help at one of the stores, but the police wouldn't let them near the place. We gave the owners a ride home.

Overall, this was an experience that I will never forget, but I wouldn't want it to happen again.
Agendas & Minutes
Jobs
City Council
City Clerk
Public Works
Police