The project consisted of replacing the bridge deck with a pre-cast structure known as an Inverset bridge which is constructed of steel beam and concrete decking, tied together with steel diaphragms. The new concrete deck surface has been surfaced with a sheet membrane for protection and covered with asphalt pavement. The existing pony trusses were completely rehabilitated off site, including the attached sidewalks super structure, and then reinstalled in their former position. The existing granite block abutment walls and bridge seat have been rehabilitated and prepared to support the new Inverset structure.

Changes
To all appearances, the new bridge is indistinguishable from the existing structure to most people, but the trusses now bear only the weight of the sidewalks, railings and pedestrians, not the entire bridge deck. Mr. Kitzmiller explained that this option was "selected because it maintains the character and look of the existing bridge". It was also explained that construction impacts, and particularly project duration, were also thoroughly considered. Essentially, the project is similar to the rehabilitation approach used for the School Street bridge, except the School Street bridge trusses no longer support either the deck or the sidewalks.
Improvements
The project took about 18 weeks from start to finish, with the bridge closed for approximately 6 weeks. A temporary footbridge extended from the Washington County Courthouse parking lot on Elm Street to the parking lot behind the former Mountain Café on Langdon Street. The new bridge accommodates the 6 parking spaces (3 on each side) that were lost when the temporary shoring was placed on the bridge. The new bridge occupies the same footprint as the old. The trusses and handrail are painted black. The handrail is the same as the railing on the School Street Bridge and there are curbs and a rub rail along the street to which parking meters are attached, also similar to School Street. Other work included with the project consists of sidewalk reconstruction (concrete with granite curb) on both sides of the bridge, as well as some street paving. The sidewalk improvements extend along both sides of the street from the driveway at Onion River Sports to the Elm Street intersection. 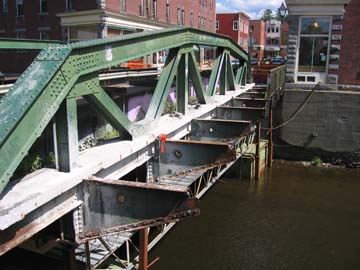 Historic Considerations
People may also be interested to learn more about the bridge and historic considerations which can be found in a report by A.G. Lichtenstein & Associates dated January 1997, copies of which are available on request from the Pubic Works office. This report was commissioned by the VT Division for Historic Preservation and is part of a statewide review of the historic truss bridge inventory and is highly regarded as a useful guide in determining rehabilitation / preservation alternatives and feasibility.

Incidentally, the bridge design selected allowed for consideration of adding the North Branch River Walk at any point in the future, if that project moves forward.
Coronavirus Updates
Agendas & Minutes
Welcome to Town
Online Payments
[]