Description of the Project
The project took place within the State Street right-of-way limits from Main Street westerly to the Taylor Street/Governor Davis Avenue intersection. 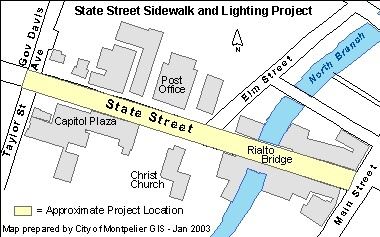 Involved sidewalk is described as being 5 separate sections, excluding previously reconstructed sidewalks such as on the north side from the Court House to Governor Davis Avenue, and on the south side in front of the Christ Church, and on both sides of the Rialto bridge. Combined sewer overflow (CSO) work was also performed on the west end of the project along the frontage of the Capital Plaza Hotel and within the Taylor Street intersection. The sidewalks were replaced in this area.

Access to stores and businesses was maintained at all times and the contractor devised a way to pour sidewalks to minimize the impact on storefront businesses. Half of the sidewalk was worked on at a time, with the goal of replacing the portion of the sidewalk next to the buildings at the end of the day, allowing it to dry over night and to be ready for pedestrian traffic by the next morning. Sidewalks adjacent to buildings were pulled up and replaced in each segment of the job as rapidly as possible. The portion of the sidewalk next to the curb took longer to replace because of work on setting conduit and bases of the light poles.

The tentative schedule was as follows:
The State Street sidewalk and lighting replacement project was one of the largest public works projects in downtown Montpelier in 20 years. Business owners and pedestrians had long been looking forward to the replacement of the rough, uneven asphalt sidewalks and ugly, inefficient lights. Store owners were open for business throughout the construction and enjoyed seeing all of their customers in the midst of the project.

Weekly informational meetings were held at City Hall on Thursdays at 8:30 a.m. The public was invited to attend those meetings.

Full sized plans are available for viewing at the Department of Public Works Office in City Hall (39 Main Street).